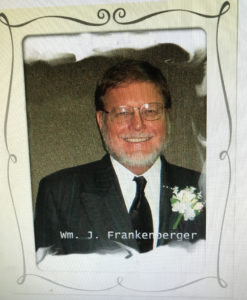 Evansville, IN – William “Bill” Joseph Frankenberger Jr., 78, of Evansville, Indiana passed away on Sunday, November 24, 2019 at his home in Evansville.

He was born on May 26, 1941 in Evansville, Indiana, the son of the late William Frankenberger Sr. and Dorothy (Demuth) Black.

Bill was a 1959 graduate from Central High School.  He served in the United States Navy from 1959-1963.  He was an avid baseball, football and basketball trivia champion at Whirlpool which he retired from in 2006 after 38 yrs. William enjoyed squirrel hunting, camping, and playing pool.  He was a skilled bargain hunter and grocery shopper, always keeping a variety of coupons on hand.  He was known for his wonderful cooking, grilling, and smoking.

He is preceded in death by his brother, David Black.

A celebration of William’s life will be held at a later date.

The family would like to give special thanks to MSA Hospice for their care and support.