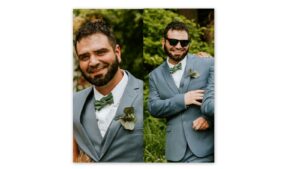 Taylor Reece Campbell was born to Barbara Price and Robert Campbell in Alameda, California in the early afternoon of October 12th,1992. He was the first born child and only son for both Barbara and Rob, as well as the first born grandchild on both sides of his family. Taylor grew up in Leo, Indiana playing football and travel baseball, spending time hanging out with his friends, and enjoying annual trips to the snow with his family where he discovered his love for snowboarding. Growing up Taylor and his younger sister Brittanie also spent many of their summers in California with family, living with their maternal grandmother Joyce and enjoying their weeks going to camp with their cousin Sarah. After graduating from Leo High School in 2010, Taylor worked various electrician and restaurant industry jobs. In 2015, wanting to return back to his home roots, Taylor moved back to Alameda with his beloved dog Mia. There, he lived for nearly seven years with his grandmother Joyce whom he loved dearly. Eventually in March of this year Taylor felt that it was time to leave California and returned back to Indiana for a few months before finally moving to Kentucky for work. In Kentucky, Taylor worked various construction jobs and gained new friendships with those he met there before his final passing on September 2nd, just one and half months shy of his 30th birthday.

Taylor had the absolute biggest heart, something which he was able to pass on to another lucky human being, as he was an organ donor. Taylor was incredibly charismatic and outgoing, befriending every stranger he met on the street and finding something to talk about with just about everyone he interacted with. He had the biggest and brightest smile and a laugh so full of joy and happiness that it made others just smile and laugh too. Taylor had a great love for animals, but most especially wolves, and of course his dog Mia. He loved to snowboard and play pool and had a unique love for cerebral and thought-provoking movies.

Taylor was blessed with a large and loving family whom he loved dearly. In particular he held incredibly close relationships with the women in his family, most notably his mother Barbara and grandmother Joyce both of whom he is survived by. Taylor is also survived by his father Rob and two step fathers, Jim and  Keith; his step mother Alyssa; his two younger sisters Brittanie and Maci; his step sister MaCayla; his paternal grandparents Jacki and Wes; and his aunts, uncles, and cousins all who loved him dearly.

Celebration of life will be October 1st, 2022