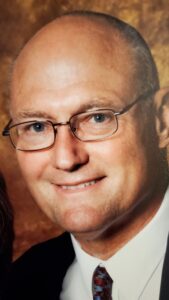 Steven William Marsh, 76, of Henderson, passed away on December 31, 2022 at the Lucy King Smith Care Center in Henderson, KY. Steve was born on September 17, 1946 in Alton, IL, to the late Royal Conklin “Conkie” Marsh and Alice Elizabeth Bartlett Marsh.

Steve took part in Chorus and intramural sports, middle school wrestling and high school indoor track. In college he was co-editor of the campus newspaper for the Homecoming edition and was also a reporter and columnist. He graduated from Illinois State University with a BS degree in Education with a major in English and minor in journalism. He taught at Jersey Community High School in Jerseyville, IL 1969-70 where he was the advisor for the student newspaper. He also taught at Shawnee State University and was a substitute teacher in Shawneetown and Eldorado, IL.

Steve appreciated trips with his family, especially the trip to New York in 1959: He visited the Empire State Building, Radio City Music Hall, the Major League Baseball Hall of Fame in Cooperstown, NY, Niagara Falls at night and riding on the Maid if the Mist. He also enjoyed playing football, basketball, canoeing, horseback riding, swimming, and walking in the woods.

Steve was baptized as one of Jehovah’s witnesses in Toledo, Ohio in 1972. He was privileged to be accepted at Watchtower Farms from 1981-83 where he served as machinist, tool room attendant and night watchman.

In 1995 he was appointed an elder and attended Ministerial Training School that same year.

He also attended the Theocratic School for Elders and had the privilege of regular pioneering.

His joy was always the ministry. He wanted people to know and love Jehovah as he did and for them to know the happy future God has instore for humankind. He also loved singing Kingdom Songs, watching the JW Broadcasts and being with friends and family.

Steve was preceded in death by his parents and sister, Jean Shimunek.