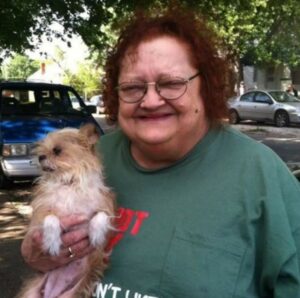 Shirley was a bright light in her family’s life, literally, from head to toe with her festive hair and shoe colors. Shirley dedicated her live to her family, not only her kids but also her grandchildren and great grandchildren.

Shirley is survived by a daughter Yvette Johnson (Dean), sons Kelly Yarde (Amanda) and Louis Whitledge II (Diane) and Anthony Yarde, a brother Shelby LaRue, grandchildren who she raised and were like her own kids Amanda Johnson (LaShawn) and Lawrence Yarde (Melissa) Other grandchildren includes Ashley Marek (John), Kelly Parker (Elijah), Shelly Wallace(Seth), Staci Whitledge (Kiesha), and her NASCAR watching partner Louis (Bud) Whitledge III plus 17 great grandchildren.
There will be no visitation but there will be a celebration of life in the near future.