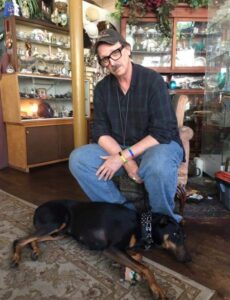 Newburgh, IN – Scott R. Lauderdale, known as Newburgh’s Country Gentleman, passed away on November 6, 2020, at the age of 65. Scott was born on May 6, 1955 to Myrtle (Satkamp) Lauderdale and Walter E. Lauderdale. He grew up in Holland, Indiana and attended Oakland City University where he earned a BA in Art Education. He held many jobs over the next eight years; working in a garden center, a bottling plant, as an art/activities instructor at nursing homes and teaching occasional noncredit courses at local universities. Around 1985 he was able to realize the dream of becoming an antique dealer. Over the next 30+ years he had shops in Evansville and primarily in Newburgh.
He closed the shop at the end of 2017 and became increasingly more ill over the next few months. In March 2018, he was diagnosed with encephalitis. For the rest of his life he was on a rollercoaster of getting better then slipping backward. Unfortunately, his condition deteriorated and he passed away in his sleep on November 6.
He didn’t really live alone. His “boy” Toby, a Doberman, was his constant companion for the last seven years of his life. Toby was a faithful and loving friend and assisted Scott with some of his physical difficulties. Fortunately, Toby has a great new home and family and is doing well.
Toby was the last of a long line of canines (and some feline) companions to Scott. He and various other fur babies participated in agility competitions and some local dog shows.
In addition to Toby, Scott is survived by his sister Linda (Randy) Cleek of Evansville, Indiana and numerous cousins on the Lauderdale and Satkamp sides of the family. He was predeceased by his parents and maternal grandparents, John and Anna Satkamp and paternal grandparents, Millie and Elisha Lauderdale as well as several aunts, uncles and cousins.
Scott will join his parents when his ashes are interred at St. Peter’s Lutheran Church in Stendal, Indiana on Saturday, November 21, 2020 at 1 p.m. CST/2 p.m. EST. A brief graveside service will be conducted by Pastor Ed Wick. Guest are asked to wear masks and be prepared to stand for 15-20 minutes. A Celebration of Life will be held in Newburgh at a later date.
If you wish to memorialize Scott, please contribute to the animal rescue organization of your choice or plant a tree or a bush. Take a walk along the river, in an art gallery or in a garden and think about your friend, Scott, the Country Gentleman.
Simple Cremation Evansville is entrusted with care.
Friends may send a condolence to the family at www.SimpleCremationEvansville.com