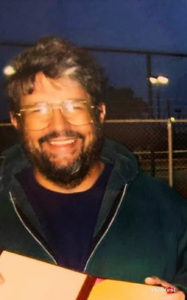 Evansville, IN – Samuel James Lester South was born in Clarinda, Iowa on June 2nd, 1956. He died on November 6, 2019 at Cypress Grove Rehabilitation Center in Evansville, Indiana.

Sam spent his childhood in Shambaugh, Iowa hunting and fishing with family and friends.

After high school he joined the Nebraska National Guard and in 1983 enlisted in the United States Air Force. While in the service he served as an Arial Gunner for the B-52, a Mental Health Service Journeyman, and Equal Opportunity and Treatment Journeyman. During his 17 years of service he served overseas during Desert Storm, Portugal, across the Midwest, Southern, and West Coast States of America.  After his retirement from the Air Force he continued to help people by earning his Bachelors in Social Work and working as a drug and alcohol counselor.

Sam could never pass up a scenic route during a drive, a quiet pond for fishing, a cold morning for hunting, or telling a good (maybe a little exaggerated) story. He didn’t know a stranger and gained many friendships along his journey.

Sam is survived by his two children, Ryanne (Caleb) Shatava and Michael (Jodi) South; along with five grandchildren, Lucas, Aiden, Elizabeth (Shatava), Kinley and Aubrey (South); and his brother David South. He will also be remembered by many nieces, nephews, neighbors, and friends.

He is preceded in death by his mother and father (Harold and Mary South), his sister Jane Andrew, and his brother John South.

There will be a visitation held at the First United Methodist Church (923 W. State St.) in Clarinda, Iowa on Saturday November 30th at 1pm to be followed at 2pm by a memorial service. Please join us to share stories and memories of Sam. He will be buried at a later date at the Haines Cemetery in Centerville, Iowa alongside his family.