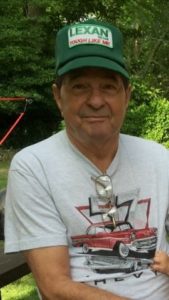 Mt. Vernon, IN – Samuel Floyd McDaniel passed away in his home on July 23, 2020, surrounded
by family and 57 Chevys. A hard worker, lifelong tinkerer, and possibly the world’s biggest fan
of 57 Chevys, Sam was humble, full of funny and often clever phrases, quite stubborn at times,
and loved by all. Together with his wife Linda Gail (Rainey) of almost 59 years, they raised three
strong-willed daughters. He was Papaw to six grandkids and nine great grandkids, whom he
loved dearly.
Sam was born “in the hills of Tennessee”, as he called it, to Charles and Bertha (Love) McDaniel
on October 1st, 1939. Sam had six brothers and seven sisters. The family moved from Harriman,
Tennessee to Southern Indiana in 1950. In 1959, Sam was stationed in Seoul, South Korea under
the 553rd Engineering Company, where he worked as an ambulance mechanic and driver.
While in the Army, he received an Expert Carbine Badge, a Marksman Rifle Badge, and a
Mechanic Badge.
While on a visit back home, it was a stop at the local Dog n Suds restaurant that would change
everything. Linda skated into his life and Sam knew right away that she was the one for him.
Two months later, they were married. In their many years together, they always enjoyed having
kids around and selflessly raised more than just their own daughters. One of their favorite
things to do together was camping, which they did almost every weekend.
After his time in the service, Sam was employed by ADM for 16 years before moving on to GE.
He retired from GE in 2002 after 25 years. He was a hardworking man and always took pride in
his work. He spent most of his retirement (and many years prior to) working on his beloved 57
Chevy. He was always tinkering in the garage and there probably wasn’t a single car in the
entire family that he hadn’t worked on.
Sam is survived by his wife, Linda; siblings, Helen Webb, Charlie McDaniel, Mary Francis Watts,
Dorothy Onkst, and Thurman McDaniel; daughters, Leanna (Gary) Mourer, Rhonda (Eric) Wolf,
and Lisa (Bryan) Steele; 5 grandchildren, Angela Mourer, Kristan Mourer, Alex (Maria) Mourer,
Sam Turpen, and Brionn Wolf; and 9 great-grandchildren.
In addition to his parents, Sam is preceded in death by his granddaughter, Tori Lee Turpen, and
siblings, Edna McDaniel, Margaret McDaniel, Arthur McDaniel, J.C. McDaniel, Wanda Blansberg,
George McDaniel, Shirley Bradshaw, and Raymond McDaniel.
Memorial service will be private. A celebration of life will be held at a later date. In lieu of
flowers, donations to the United Way of Posey County are appreciated.