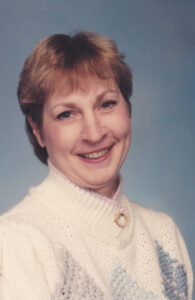 Robbie Jean Pruitt was born September 22, 1941 in Birmingham, AL to Robert Eugene Pruitt and Mary Frances Pruitt (Rollins). They soon moved to Los Angeles, CA where Rob went to grade school and Hollywood High School. Rob worked several jobs including a purchaser for a Defense Contractor and at Revell Plastics. In the early 1980’s she moved to Atlanta, GA where in 1982 she met David Turner. David asked her to marry him on the anniversary of their first date. In a 17th Century Confessional Booth converted to a dining booth at the Lion and Unicorn Restaurant in Decatur, GA, Rob accepted and a marriage of over 37 years began on July 9, 1983. They were wed in the Little Chapel at Glenn Memorial United Methodist Church in Atlanta with David’s brother, Forest Turner as best man and Julie Turner as Maid of Honor.

After living in apartments in Clarkston and Stone Mountain, GA, they purchased their first home in Stone Mountain and their Second home in Grayson, GA before moving to Evansville in 2015 after David retired.

Rob loved painting ceramics, watching new and old movies, and listening to music of all kinds. She was fond of reading, especially Stephen King and Anne Rice. She also loved reading European Historian with a special interest in Celtic History, books on animals, nature, and archeology. She also liked to write poetry and started a book of poems that were written for her husband, David.

Rob was a breast cancer survivor but was diagnosed with COPD not long after ending chemo treatment. In her last years of life she was stricken with Dementia which caused her to only live in the moment and by a strict clock schedule. She died December 7, 2020 at home peacefully with David and Chaplain Annis by her sided. She was an only child and was preceded in death by her Grandmother, mother, and father.

Rob will be cremated and because of the COVID cautions there will be no service. A memorial will be held at a later date. Rob wanted an Irish Wake so get your favorite beverage and raise a glass to her. In lieu of flowers, she would love if you donated to the American Red Cross or your local No-Kill Animal Shelter.

RIP my girl. I will love you forever.