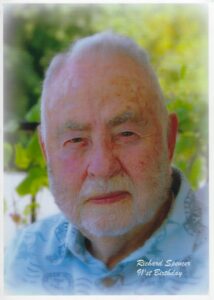 Evansville, IN – Richard Henry Spencer passed away on Thursday, March 17, 2022 at the age of 94.  He was born on August 5, 1927, in southeast Missouri to Austin and Flora (Morrow) Spencer.  He lived a wild, barefoot childhood until he was forced to wear shoes to go to school.  His formal education ended at eighth grade, as was normal at that time.  He lied about his age to apply for and was accepted to Sweeney Aircraft School in Kansas City, Missouri at the age of fifteen.  Upon graduating, he became the youngest Federal Civil Service aircraft mechanic and took a job at the Army Air Corps Air Base in Malden, MO, in 1942.

Once he turned eighteen in 1945, Richard signed up for the Army. Due to his decision to teach himself and all his neighborhood friends Morse Code as kids to let them communicate across the town, he qualified for and was sent to school at Vint Hill Farm near Warrenton, VA.  While it looked like a real farm, the real workings were underneath.  At this school he finely honed his Morse Code abilities and when he passed the final test, was sent to his duty station located along the DMZ in Korea where his job was radio intercept operator.  After a year, he was not given a choice due to his duties in the military and was given an honorable discharge.

Once home, Richard worked a variety of jobs, finally settling in as a parts department manager at a dealership in Malden, MO.  This line of work took him from Missouri to Carmi, IL, to Carterville, IL.  Once there, he began employment at Southern Illinois University, where he retired.  He was an avid, award-winning photographer of wildlife, a talented wood worker, and he never lost his fascination of aviation.  His number one priority was his family, whom he loved well and completely.

Richard is preceded in death by his parents and his brothers and sisters, Beatrice, Benjamin, Lomie, Mattie, and Lucille.  He is survived by his wife, Carolyn Sue Spencer or Evansville, IN; daughters Sharon (Ron) Brown of Marion, IL, Tracy (Michael) Wheatley of Evansville, IN, and Lesa Spencer of Murphysboro, IL; grandchildren Kristin (Steve) Francis, Brooke and Blair Wheatley, Wesley (Rachel) Norton, Vyvyan (Millie) Ricks, and Harry Shelton; great-grandchildren Veronica and Isabella Francis.