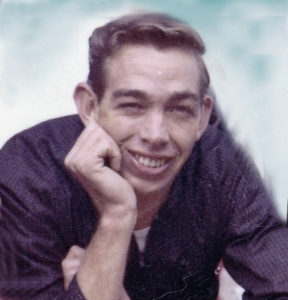 Dickie Ward passed away peacefully at home in Smith Mills surrounded by family on September 6, 2019, at the age of 82.

He was born July 3, 1937 at home in Reed, KY on the family farm. He was raised and spent many years of his life on the farm, farming, raising cattle and of course hunting. He graduated high school from Holy Name in Henderson KY, then served his country in the United States Army. His shooting skills were recognized and he was placed on the nine member roster for the Fort Gordon (Georgia) Rifle Team in 1962.

His love of the outdoors was a lifelong passion. He loved raising and training hunting dogs all of his life, and was always known for some of the best coon dogs in the area. Later in life, he moved on to beagles and rabbit hunting, but good dogs were always associated with him. He was a loyal friend (and had loyal friends) who could always be called upon to help when needed. If a yard needed mowing, or a hunting buddy was in need, he would never hesitate to help, all you had to do was call.

Dickie had a deep love for family, friends and especially kids. He loved taking kids hunting, teaching them little things in his own way, and watching them loving life and having fun.

He was preceded in death by his dad, Rommie and mother, Pearl Boarman Ward; five brothers; one sister; one stepdaughter, Tonni Reasor.

Dickie loved his Church and Church Family. In lieu of flowers he would have wanted expressions of grief to go towards donations to the Cairo Methodist Church Building Fund, at 13510 US Highway 41A, Henderson, KY 42420.