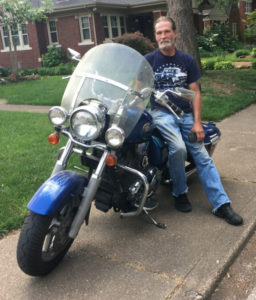 At the age of 9 months Randy was adopted by a loving family, Richard A. and Evelyn T. Boink eagerly welcomed this baby into their arms of care.  Later they adopted a second baby, Ronald into the family.

Randy attended St. Benedict Grade School and later graduated from Bosse High School in 1973.  He continued education at Ivy Tech Community College in Evansville, IN with an Associate Degree in Automotive Technology. Being an excellent auto mechanic, Randy was also a skilled carpenter, carpet and tile floor layer.

Randy is preceded in death by his parents.

People who really, really knew him were exposed to a man that had qualities that few men possess. He had the gift of giving and caring in his own special way.  He would give of his time and possessions to others without hesitation.  On several occasions he would take someone into his home who had nowhere to go and had nothing to speak of.  Randy gave them food and a dry warm place to sleep- not just for a few days, but for weeks at a time and very regularly volunteered at the food bank.  He would say he wasn’t a preacher but would do what he thought God wanted him to do. What he was saying was it’s not the volume of the gift, it’s the willingness to walk in it with love.

Although he was at times a little rough around the edges and a bit head strong, who at times in not?  God created him with qualities of willingness, humility and compassion.

This incredible man will be greatly missed, and his legacy will forever remain in the council of God.

A Celebration of Life Memorial Service will begin at 1:00 following the visitation.