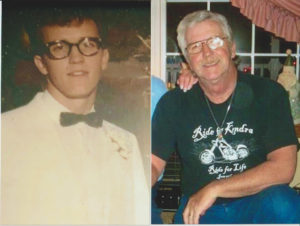 He was born on January 28, 1946 to Mona June (Wilkinson) Alka and Ralph Elvis Wade in Princeton, IN

Ralph was a 1964 graduate of Owensville High School. He married Linda Dianne Straw on July 16, 1964. They have three children, Robbin (Carl) Sparacino of Owensville, Jason (Tricia) Wade of Fort Branch and Jeromy (Dawn) Wade of Owensville

He was retired from the International Brotherhood of Boilermakers after 35 years of service with Local 374 out of Hammond, IN.

Riding his Harley-Davidson motorcycle was his greatest joy besides his kids and grandkids. He also enjoyed building and fixing things and occasionally fishing.

Simple Cremation of Evansville is handling final services. A private gathering will be held at a later date.

A special thanks goes to Heart to Heart Hospice for their care during this difficult time.