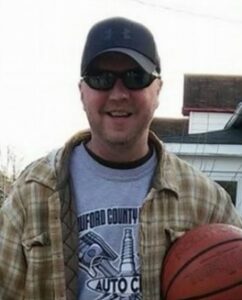 Phillip (Phil) Warren Crabtree age 51 of Robinson, IL, passed away peacefully in Evansville, IN on Saturday, January 7, 2023 at 5:24 a.m. surrounded by family.

Phil was raised in Chandlerville, IL with his mother, Kim and dad, Ronnie (Andrea) Pherigo of Chandlerville, IL.  He was a graduate of Chandlerville High School where he was active in basketball.  He then attended Spoon River College where he was on the Dean’s list and received his automotive certifications.  He spent several years living in the Havana, IL area before moving to Vincennes, IN.  Shortly after, he moved to Robinson, IL where he met his Fiancé, Karree Milburn.  Phil started his 25 year career at Auto Zone in Vincennes and transferred to a store in Robinson where he would eventually become Store Manager.  Phil was a natural comedian with an orneriness that was sure to make anyone laugh and smile.  Phil loved watching his three boys grow up, teaching them life skills, spending time with them and cooking for his family. He loved being outdoors, fishing, hunting, camping, frog gigging, and playing basketball with his boys.   Sitting around a campfire listening to music was one of his favorite pastimes.  He always enjoyed spending time with his family and having a drink with friends.   His nieces and nephews always loved to hear their Uncle Phil tell stories of his younger days.   In recent months, he enjoyed late night calls with his mom talking about anything and everything.

He was preceded in death by his maternal and paternal grandparents along with his father, Kyle Crabtree and nephew, Brock Reid.

Phil will be deeply missed by all those who knew and loved him.

Precious in the sight of the Lord is the death of his saints.  Psalm 116:15

Family, friends, and others whose lives Phil touched are invited to a Celebration of Life service at Hopewell Baptist Church in Snicarte, IL that will be held at a later date.  In lieu of flowers, condolences may be made to Phil’s family at 509 S. Howard St, Robinson, IL  62454, for financial support while the estate is being settled.