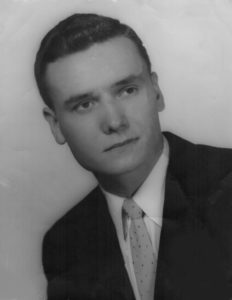 He graduated from the University of Kentucky and worked his entire life in the Henderson area as a land surveyor and engineer. On January 31, 1959, Terry married Shirley Ann English and together they raised three children, Bruce, Beth, and Bonny. They remained married until his death, recently celebrating their 60th anniversary. Terry coached Pee-Wee baseball for 20 years and was a lifelong fan of the Chicago Cubs and the Kentucky Wildcats. He always made time for his children and grandchildren, supporting them in all of their sports and activities. He was well known for his dry sense of humor and always had a joke to tell.

Friends and relatives are invited to attend a memorial service to be held at Benton-Glunt Funeral Home in Henderson, KY at 3pm on Saturday February 23rd. Visitation will be from 1pm to 3pm the day of the service. Chaplin Tim Shockley will officiate.