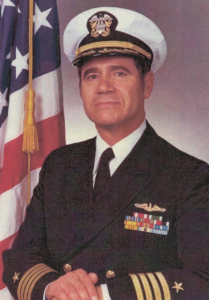 Paul E. Trejo, 93, passed away at his home in Newburgh, Indiana, with his wife at his side on September 15, 2020.  Paul grew up in the coastal town of Pacific Grove, California where he lived until his graduation from high school.

As a boy during the Great Depression, he contributed to the family finances by selling sacks of pine cones, huckleberries by the quart, magazines door-to-door as well as packing eggs at Holman’s Department Store.  At the end of the week he was permitted to keep ten cents for the Saturday matinee.  During these formative years he was a Cub Scout, Boy Scout of Pacific Grove Troop 92 and a Sea Scout.  At the age of 12 he worked on a commercial fishing boat named the Two Brothers during the summer which helped fuel his love of the sea and the life of a sailor.

During high school Paul excelled in athletics, lettering in track and football three years and winning his class number three years in intramural track.  His senior year he was elected captain of the track team.

In July 1944, Paul reported to the Naval V-5/V-12 Unit as an Aviation Cadet at the University of Redlands.  When that unit was decommissioned in 1945, Paul was transferred to the University of Southern California where he earned a bachelor of science degree in Naval Science in 1947.  He was then commissioned a Midshipman under the Navy’s Halloway Program.  He served aboard the USS McCook (DD-496/DMS-36), USS Floyd B. Parks (DD-884), USS Blenny (SS-324), USS Bashaw (SSK-241), and USS Barbero (SSG-317).  In 1955 Paul attended the prestigious Naval Post Graduate School in Monterey, California where he earned a degree in electrical engineering.  He joined the Naval Reserve in 1959 after leaving the regular navy and retired in 1984 with the rank of Captain after forty years of service.  His greatest love and accomplishment in life was serving in the United States Navy.  During his service Paul earned the following personal decorations:  The Presidential Meritorious Service Award and the Navy Commendation Medal.  He also earned the following service medals:  American Theater World War II, World War II Victory Medal, Navy Occupation Medal with Asian Clasp, China Service Medal, National Defense Medal with star, United States Korean Service Medal, Vietnam Service Medal and Armed Forces Reserve Medal (Gold Hour Glass), United Nations Service Medal (Korea) and Republic of Korea Service Medal.

During Paul’s reservist years he attended San Jose State University where he earned a master’s degree in physical science.  While attending the university he was asked to teach physics as well and after two years left the university and began teaching for the Foothill-De Anza Community College District.  His primary subject was astronomy, but would fill in when needed to teach physics and engineering circuit analysis.  He installed and ran the planetarium at the Foothill campus and later at the De Anza campus, retiring from the District after twenty-eight years.  He authored an astronomy textbook as well as three math books during his years at Foothill-De Anza Community College.

Paul was preceded in death by his newborn son, Paul, Jr., his brother Ernest and half-sister Margaret.  He is survived by his devoted wife of 32 years, Kathleen, his son Lesley (Miami), his daughter Catherine (Marti), grandchildren Oceana (Leif), Sky, Natashya (Edward), Ruth and Tamara (Shawn) as well as ten great grandchildren.  He is also survived by a half-brother Glen (Nathalie) and two half-sisters Hazel (Carl) and Dorothy (Edward).

Paul was a man who achieved so much, asked for so little and will be greatly missed by those who knew and loved him.