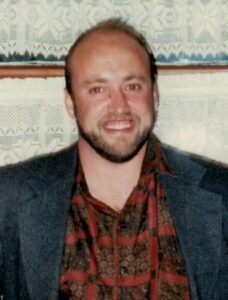 Evansville, IN – Patrick Arthur White, 57, of Evansville, Indiana, has passed away. He was born in Linton, Indiana on March 18, 1965 to Bobbie, Sr. and Anna Birgitta White.

Patrick was heavily involved in sports of all kinds and had been an all-city soccer player. In his career, he had worked in construction. He later spent his time as a rock musician, singing in church and playing guitar as well as painting, in which he was very skilled.

He often spent his summers in Sweden, where his grandparents lived.

He is survived by his mother, Birgitta White; his brother, Bobbie G. White, Jr.; his former spouse, Glenda White and his step-daughter, Kristin Benders.

Patrick is preceded in death by his father, Bobbie White, Sr.

A celebration of life will be held on Monday, August 22, 2022 at Christian Fellowship Church on Millersburg Rd. in Evansville, Indiana.  Visitation will be held from 4 P.M. to 6 P.M. with a memorial service at 6 P.M.