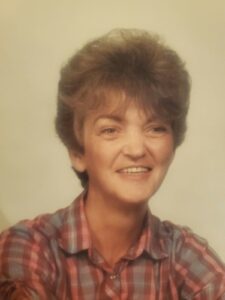 Pat was well-known for being exceptionally hardworking.  She displayed a fierce independence while raising her five children alone for many years.  In 1974 Pat became one of Jehovah’s Witnesses and attended the Kingdom Hall in Boonville, Indiana for the rest of her life.

A memorial service via Zoom will be announced at a later date.

Our family especially thanks Pat’s daughter, Rhonda, for her loving sacrifices as her mother’s primary caregiver for the last 6 1/2 years.  We would also like to thank Heart to Heart Hospice Care for their help in caring for Pat the last few weeks of her life.