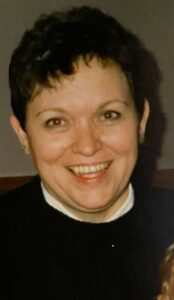 On the evening of June 1st, Odessa Maureen Straw. 87 years old, died peacefully at Bethel Manor in Evansville after a lengthy struggle with small vessel disease. Odessa was born in Gibson County and spent most of her childhood in Griffin. She graduated as valedictorian of her class in 1951, and went on to be a valued employee at the Department of Economics at Indiana University and the Counseling Center at Western Michigan University (Career Media Center).She married Tom Straw in 1956, after having developed a much higher opinion of him than she had when they were classmates. Odessa and Tom lived in Kalamazoo, MI, from 1968 to 1997while he was a professor at WMU. After retiring, they returned to Posey County and have since lived in New Harmony. Odessa was an avid reader and a remarkable interior decorator, and  was known by her daughters as the fashion police. But she was best known for her winning smile and irrepressible laugh, and her love of God and family. She was an active member of the Disciples of Christ Church in Kalamazoo and St. Stephens Episcopal Church in New Harmony, where she served on the vestry and as a member of the altar guild. As Odessa’s health deteriorated, she spent hours arranging pictures of her family so she could see each one at a glance.

A private funeral service for family, followed by interment, will be held at St. Stephen’s Episcopal Church in New Harmony, IN.