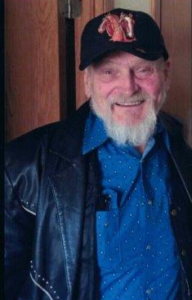 He was born in Hillsdale, Michigan on May 8th, 1943.  He was the son of the late Harrison Benjamin and Ivone (Watkins) Fogel. Also proceeding him in death are his wife; June Benjamin, son; Jason Benjamin, grandchild; Nathaniel Benjamin, and sister Judy

Michael retired from General Motors in Danville, Illinois and Waupaca Foundry in Tell City, Indiana. He enjoyed collecting rare western antiquities, attending flea markets and horse auctions, listening to Johnny Cash, woodworking, and hunting. He was the best story teller, who always said he would live to be 100, and be shot by a jealous husband.  He was a strong advocate for the Honky Tank Bar Association.

No services will be held.  A private Celebration of Life will take place at a later date.  In lieu of flowers, memorial contributions may be given to the Alzheimer’s Association or AseraCare Hospice.  Family of Michael wishes to sincerely thank AseraCare Hospice for their compassionate care and support.