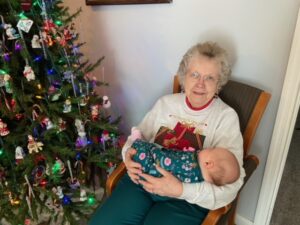 Maydell Frank, 90, of Evansville, Indiana passed away on Friday, December 4, 2020, at Deaconess Gateway Hospital. She was born on June 9, 1930, to the late Henry and Gertrude Mills of Tell City, Indiana.

She was preceded in death by her parents; her husband, Ralph Frank; her son, Ralph Frank, Jr.; brothers, Charles and Bobby and sisters, Hairolyn and Betty.

She is survived by her daughters, Rachel Bailey (Jim) of Madisonville, KY, Rebecca Milligan (Bruce) of Newburgh, and Beverly Frank of Evansville, 6 grandchildren, 11 great-grandchildren, brother, Marion Mills (Rosie) of Evansville and Sisters, Alice Kowal and Sue Dooley of Tell City.

She enjoyed spending time with her family and friends as well as sewing, quilting, knitting, and crocheting. She remained active and loved her knitting group at Fairlawn United Methodist Church and her quilting that met at the American Legion in Newburgh.

A Celebration of Maydell’s Life will occur at a later date. Private burial service will be held at Greenwood Cemetery in Tell City.

In Lieu of flowers memorial contributions may be made to Fairlawn United Methodist Church in Evansville.