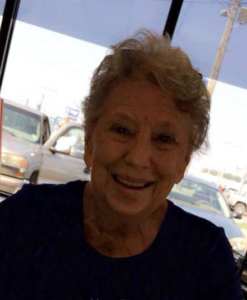 Evansville, IN – Marilou Elizabeth Vaughan, 80, of Evansville, Indiana went home to be with her Lord and Saviour on October 10, 2018 at Deaconess Gateway Newburgh, Indiana.

She was born in Evansville December 28, 1937 to the late Howard Martin and Virginia Emily (Lockyear) Nicholson.  Marilou went to the Millersburg School where she met her high school sweetheart, Jerry.  They were married by the Justice of the Peace on August 17, 1956.  Uncle Jack and his wife Marlyn stood up for them and they all headed straight to the fair where they ate fish sandwiches and rode the bumper cars till they were broke.

Marilou worked at Furrows Lumber for several years and then became a waitress.  She enjoyed riding on the back of her husband’s Harley Davidson and shooting pool in the leagues with him.  She was a loving wife, mother, grandmother, great-grandmother and precious friend to many.  Marilou was saved by her Lord and Saviour on July 6, 2018 by Dawn’s good friend Vickie Bishop.

She is preceded in death by her husband and son, Kent Vaughan.

Special thanks to the “Carousel Gang” Joyce, Judy, Kim and Missy for being such great friends. As well as many of her other friends,

A Celebration of Life will be held at a later date.  Simple Cremation Evansville is entrusted with care.