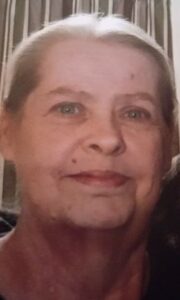 Mary enjoyed knitting, crocheting and was a collector of many things.

Mary is preceded in death by her husband, John Rex Porter, Jr.; her sisters, Linda Hobart and Sandy Welch as well as her step-siblings, Ginger Finn, Dennis Hartley, Bill Hartley and Richard Hartley.

A memory of life celebration will be held at a later date.