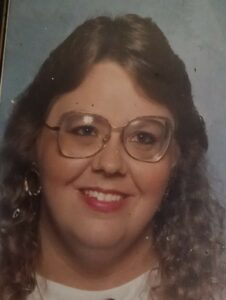 Henderson, KY – Mary J. (Evans) McLean, 55, of Henderson, Kentucky, passed away on Saturday, December 10, 2022 at Deaconess Hospital in Henderson.  She was born on September 1, 1967 in Henderson to Jerry and Brenda Evans.

Mary was a member of Country View General Baptist Church in Henderson, Kentucky.  She enjoyed going to mud bogs and talking on the phone with her granddaughter.

She is survived by her son, Marlin Brooks (Kristian); her grandchildren, Mia Brooks and Dominick Brooks; her father, Jerry Evans and her sisters, Lori, Betty, Jerry Len and Laura Kay.

Mary is preceded in death by her mother, Brenda Evans.