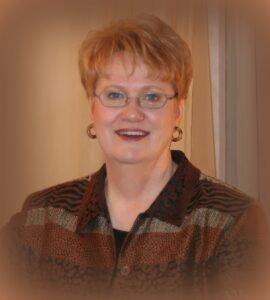 Marj started writing at a very young age and loved word craft all her life. Marj was an editor, publisher and freelance writer who wrote under the name Marjorie L. Russell. Marj received several awards including the Christian Writer’s Association Award, the Southern Illinois Newspaper Association Award, and the Amy Award for Religious Writing Published in a Secular Newspaper. She was Executive Editor of American Quilter Magazine and, after leaving that position, she continued on as a feature writer for the publication.

Marj co-authored Seams Unlikely, the autobiography of the late Nancy Zieman , whose program “Sewing With Nancy” has aired on Public Broadcasting Channels for over 36 years.  Seams Unlikely achieved an Amazon ranking of 4.7/5 stars of countless readers. Marj is also interviewed in “Nancy Zieman: Extraordinary Grace” which will be airing nationwide on PBS in 2021.

In lieu of flowers, donations can be made to the Destiny Church Evansville, IN Community Center Building Fund. https://destinychurch.reasonfunding.com/donate?fbclid=IwAR2G7-1cjhIgKFk2UFPUtGySu7z9f2jPZ7ZLqJ_wVn2JRPx72fFPZs8luxQ

A memorial service will be held on March 13, 2021 at 10 am at Destiny Church in Evansville, IN as well as a live stream on Youtube.com https://www.youtube.com/channel/UCqq5h09O2rsbfEKJ3ch9ffQ