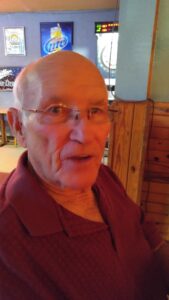 Louis was born in Avant, Oklahoma on July 20, 1931 to the late Louis Ludwig Olson Sr. and Alice Maureen (Edwards) Olson.

Lou stated his father took his family and the little money he had and headed for California for better opportunities. He graduated from Vacaville High School and enlisted in the United States Airforce to become a pilot. He worked at an automotive mechanic at Stith Chevrolet for over 25 years. He enjoyed flying his plane, fishing for salmon in the Klickitat River, fishing for sturgeon in the Colombia River, and racing of any kind.

He is preceded in death by his son, John Olson; brother, Roy; sisters, Anna and Doris

Service will be held on Friday 10 A.M. at Mill Creek Estates