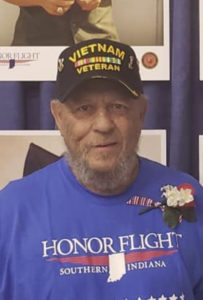 Lorend “Rocky” Brown, age 71, of Evansville, Indiana, passed away at 11 A.M. on Sunday, March, 22, 2020 at his home after losing his battle with brain cancer. Rocky was born on October, 11, 1948 in Evansville, Indiana to the late James E. Brown and Enola (Compton) Duke. He was a graduate of Bosse High School. He also served in the Army, fought in the Vietnam War and was a Purple Heart recipient.

He worked for numerous construction companies throughout his life, including his own and he was a licensed plumber. Rocky loved nothing more than racing, especially dirt track racing. He spent his life either participating as a race car driver, being part of the pit crew, or traveling to nearby racetracks to be a spectator. He was also proud to be a part of the Brown Bleacher Bums family at Tri-State Speedway.

When not at a race, he could be found having a beer or simply hanging out at the Marigold Bar. Most everyone would say that Rocky was rough around the edges and had a colorful vocabulary. He was never quite the family man and would be considered rather unconventional is his ways. He always did things his own way on his own schedule. He would always help someone in need; just not necessarily when you needed it… but likely hours or even days later. This trait is what helped him gain the nickname of F.A. Brown.

Whether you loved or hated the man, one thing is certain – he was not a man easily forgotten when you had the experience of meeting him.

Rocky is preceded in death by his wife, Cheryl (Jones) Brown and his older brother, James “Jimmy” Brown.

Funeral services will be private. Due to COVID-19, there will be no visitation or celebration of life at this time. In celebration of Rocky, go enjoy a beer/beverage of choice and /or attend a race at Tri-State Speedway this upcoming season.

In lieu of flowers, memorial contributions may be made to his grandchildren’s college funds at any Old National Bank branch under the ‘For the Benefit of Rocky Brown’.