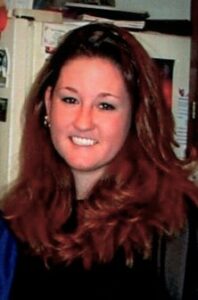 She was born November 16, 1978 in Evansville Indiana. Laura graduated in 1997 from William Henry Harrison High School in Evansville where she was a member of the marching band’s Color Guard. It was in high school where she realized her love of caring for children. That led her to attend and graduate from Sullivan College in Louisville, KY where she earned certification as a Licensed Professional Nanny.

Laura was an absolutely adorable child growing up. She was always known for her caring heart and her pigtails that curled perfectly. She was also very sentimental and was still in possession of many items from her childhood including her favorite stuffed monkey named Jobu. Laura had collected monkeys of different sorts all throughout her life.  She was a huge fan of Pink Floyd and the Beatles having grown up listening to both. She enjoyed boating, camping, and playing games on her computer. Her greatest joys, though, were her many nieces and nephews and her furbabies.

Laura is survived by her parents, Pamela & Larry Schmeing and Charles (Rick) & Linda Graham. Her Partner/fiancée of 20 years, Cindy Hill, whom she referred to as her wife; sisters, Tracy Majors (David), Amber Ungethiem, and Megan Cox (Spencer); grandparents, Bill & Jean Sims and Barbara Blanchette; many Aunts, Uncles, And Cousins; Nieces and Nephews, Logan & Jacob Russ, Brylee, Lillian, and Brooks Ungethiem and Lucille Cox. She was also a beloved aunt to Cindy’s many nieces and nephews, all of whom she adored.

A celebration of life for Laura will be held on Saturday, January 2nd, 2021 at Perigo Chapel-Koehler Funeral Home, 7022 Heim Road,  Chandler, IN. Gathering will be from 10 am – 1pm with the Celebration Service beginning at 1pm.

In lieu of flowers, the family requests that memorial donations be made in Laura’s name to Teen Challenge Addiction Services, Helping Hands: Monkey Helpers, or Jungle Friends Primate Society.