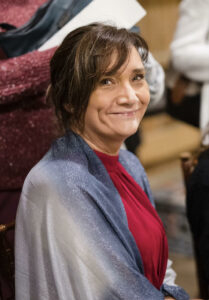 Lanette Renee Brooks passed away peacefully on October 20, 2022 after her battle with glioblastoma. She was 53.

Lanette was born in Louisville, Kentucky, December 18, 1968. She had two younger siblings, they all attended Edmonson County High School. As a child and young adult, she played the flute and was part of the high school band. She went on to study Finance at Western Kentucky University. She later started playing the guitar, became an avid gamer, and worked as a Team Leader at General Motors in Bowling Green, Kentucky. Lanette had a strong love for music, reading, traveling, and dessert. She prioritized family vacations, and the beach was her happy place.

Lanette was a wonderful mother, and her two daughters were the central figures in her life. Anyone that knew her would tell you, “She always talked about her girls.” She was known to be incredibly generous, never met a stranger, and had many friends. To know her is to love her.

She is survived by her parents, Maurita Miller and Charles Brooks (Sharon Brooks); her daughters, Jenna Woosley-Owens (Brandon Owens) and Lily Woosley; her siblings, Lori Brooks and Charles ‘Bub’ Brooks; and her nieces and nephews, Kris Vincent (Alani and Charlie Vincent), Andrew Brooks, Brady Vincent (Raina Vincent), and Ella Brooks, as well as her cat, Jupiter.

In lieu of flowers, donations can be sent to the American Brain Tumor Association in honor of Lanette R. Brooks.

when the day is gone

and the light turns to dust.

In the memories walking along you,
on those serene nights,

in the empty spaces.

In the smells that only you recognize,

in the memory of what was mine

and now is of the time.

In the light that accompanies you,

in the calmness when you stare at the sky.

Even if you don’t know I’m there

When the wind is blowing

and the flame lights up.

When life gives us