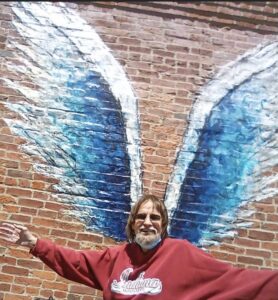 Kim Ward Frederickson, 67, formerly of Princeton, Indiana passed away Tuesday, March 8, 2022 at St. Vincent Hospital in Evansville. Kim was born May 3, 1954 in Princeton to Ward and Shirley Frederickson. He attended St. Joseph School and had rollicking good times with his friends and classmates from the St. Joe neighborhood yielding many wild adventures and hilarious stories. He for years took top honors at the city pool diving contests and never missed an opportunity to jump off something high whether it was at a limestone quarry or on the tallest IU diving platform. Snooker was his pool game and he enjoyed playing regularly at the Palace when he wasn’t working at Dick Clarks or showcasing Pete Maravich basketball tricks at the city park courts.

Kim graduated from Princeton Community High School with the class of 1972 before attending Indiana University earning a Bachelor of Science/Biology & Chemistry and a Masters of Science/Instructional Systems Technology in one of the first IU graduating classes in this pioneering field. Kim had an enviable career in IT beginning at Digital Equipment Corporation (Compaq) in Boston, Massachusetts and then in Indiana where he introduced his new found skills in systems networking for Melvin Simon & Associates, Public Service Indiana (Duke Energy) & Indiana University Foundation in Bloomington. Subsequent to the prestigious positions he held with these companies he provided cutting edge consulting services nationwide to forward-thinking organizations. In recent years, Kim returned to Gibson County and enjoyed his early retirement spending quality time with family and friends. Kim was an exceedingly gifted musician and enjoyed sharing his finger-picking style guitar to music lovers at a local house concert or in a neighborhood music venue. His talent for guitar work was his truest gift to the world and he produced YouTube videos to teach and share his love of music.

Kim is survived by his brother, James Frederickson (Gina), sisters, Jean Ann Kizer, Shara Mitchell (William) and Diana “Dynee” Hill (John) and many nieces and nephews and great nieces and nephews. Kim was preceded in death by his parents, grandparents, a brother, David Frederickson, a sister, Darla White and a nephew, Landon Hill.

Throughout his life Kim brought much happiness to his family and friends with his uproarious and irreverent sense of humor and his genuine zest for life! Although he was challenged with major health issues later in life, he was determined to live his life to the fullest and on his own terms. He will be missed. By his wishes there will be no funeral services but a celebration of Kim’s life will be held by the family in the springtime – near to the time of his birthday!