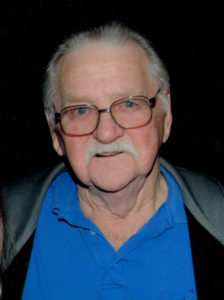 Joseph Howard Russell, born September 20, 1937 in Henderson, Kentucky to the late Katherine Abernathy and the late William Russell, passed away at age 81 on December 25, 2018 at the Linda E. White Hospice House in Evansville, Indiana. Joe served in the US Navy and worked at Royster’s Machine Shop as a welder until his retirement.  Joe was preceded in death by his stepfather, Aaron Phillips; brother, Thomas Phillips; and sister, Charlotte Hinton.  He is survived by his son, Rocky McDaniel (Alissa Cape) of Reynolds Station, KY; daughters, Robin Royster (David Byrd), Heather Hardin (John) and Stephanie Hamilton (Todd) all of Henderson, KY; brother, William Russell (Freida) of Holiday, Florida; and grandchildren, Amanda Royster, Cody Royster, Jordan Hardin, Johnna Hardin, Jarret Hardin, Christian Hardin, Sarah Hamilton, Parker Hamilton, Molly Hamilton, and Marissa McDaniel.  Joe loved riding horses, playing and watching golf, and spending time on his property.  He was always up for a good story about the years he spent as a jockey and the time he spent overseas in the US Navy.  He was happiest when surrounded by his children, grandchildren and his lapdog.  He was lifelong member of AQHA and a retired carpenter through the United Brotherhood of Carpenters Local #549.  A private service will be held at a later date.  Expressions of sympathy can be made in the form of donations to the Linda E. White Hospice House.