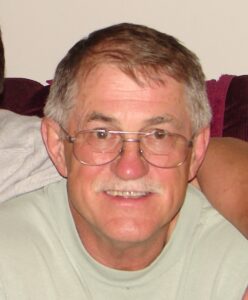 Johnny Lynn Johnson passed away January 3, 2021 in Evansville. He was born in his home in Montgomery Township, Gibson County, Indiana on September 20, 1941.

Johnny graduated in 1959 from Owensville High School. He was a member of the basketball team and active in the Future Farmers of America. He and his wife Louanna retained close ties with their high school classmates.+

His family was very proud of him, as he was the first member to attend and ultimately graduate from college. Johnny was awarded a Bachelor of Science in Mathematics from the University of Cincinnati in May 1968.

Louanna and he longed for home and returned to the Hoosier state in 1968.

Johnny was an engineer and retired from Duke Energy in 2002. At the age of 51, he earned his Professional Engineer license. Later in life, he became a Harley-Davidson enthusiast and enjoyed several road trips with his Duke Energy friends.

His second act—the role of a grandfather—was the most successful and rewarding of his lifetime. Known as “Gramps”, Johnny taught his grandchildren how to fish and handle firearms. He was terrific at reading stories and “jazzing them up.” Johnny and Louanna treated their grandchildren to many wonderful vacations.

Johnny was a master gardener, ham radio operator, self-taught guitar player, scuba diver and woodworker. He had a voracious appetite for books and was a World War II buff. Johnny was a physical fitness enthusiast and competed in road races.

Over a 31-year span, he built championship Pinewood Derby cars. Although he could not compete with his wife in the kitchen, he mastered the art of grilling and smoking meat. His children and grandchildren will tell you he was the go-to source for help with math homework.

Johnny was a member of United General Baptist Church. Over the years, he conducted many Sunday school classes.

A celebration of his life will be held Saturday, January 9 at 4pm at United General Baptist Church, 3500 Mesker Park Drive, Evansville, Indiana.

In lieu of flowers, please contribute to the Evansville Christian Life Center.