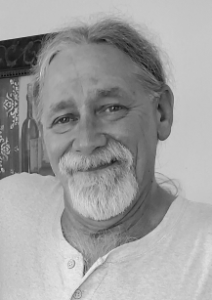 John grew up in Shreveport Louisiana, but had been living in Kentucky for many years and considered it his home.

John had a zest for life. Growing up he loved singing and playing guitar and was quite talented. For John, there was nothing better in life than camping out in the woods, sitting around a campfire and playing the guitar.

He could enthrall people with his stories and leave people breathless with laughter. There was never a dull moment when he was around family and friends. He loved living in Kentucky. He enjoyed living in a small town and really connecting with people. He spoke of how incredibly kind and caring people were in and around Bonnieville.

John worked at many different jobs throughout his life. He had an amazing work ethic and worked hard at any task that he was given.

John is survived by one son and daughter-in-law, John Wesley and Ashley Harvill, four sisters – Teresa Miller (Chuck), Nell Lamendola, Janet Bals (Eddie) and Gwen Tyler   (John) – and numerous nieces and nephews. He is also survived by his longtime friend and companion Donna Davenport. His parents, Stafford and Jackie Harvill, predeceased him.