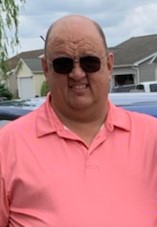 Chandler, IN – Jason Robert Egbert, 49, formerly of Huntingburg, Indiana, passed away on Sunday, October 16, 2022 at St. Vincent Hospital in Evansville, Indiana.  He was born on December 26, 1972 to Gary Egbert and Rebecca (Harris) Phillips.

Jason worked as a parts delivery driver for Peterbilt of Evansville.  He enjoyed working on vehicles, collecting Peterbilt models and spending time with his beloved family.

He is survived by his wife, Angela (Suter) Egbert; his daughters, Megan and Dawna Egbert, both of Mariah Hill, Indiana; his step-daughters, Heather and Ashley Willis; his mother and step-father, Rebecca and Ron Phillips; his brother, Jeff Egbert and his step-brother, Jim Phillips.

Jason is preceded in death by his father, Gary Egbert; his grandparents, Bob & Biddy Harris and Don & Betty Egbert.