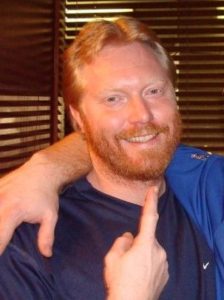 Jason “JDog” Anslinger was born on May 30th of 1974 in Evansville, Indiana. He is proceeded in death by Grandparents Cletus and Geneva Anslinger and Grandfather Hilbert Graman.  He is survived by his parents, Gene and Darlene Anslinger, his brothers Kevin (Jennifer), Scott (Stephanie), Jared (Tatam), sister Staci (Logan) Brand, daughter Mariah (Will) Eagan, Grandmother Alberta Graman, nieces and nephews Camdyn and Colton Anslinger, Lydia and Clara Anslinger, Mason Brand, and numerous beloved aunts, uncles, and cousins. Jason was also expecting his first granddaughter, Lola, in June.

Jason graduated North High School in 1992 where he played quints in marching band and was a great drum set and mallet player. He was awarded the Kiwanis Arion Award for Band his senior year. He then studied music performance at Indiana State and continued a love of music throughout his life.

Jason was the proud oldest of 5 siblings and loved spending time with family.  He is remembered for his humor, conversation, and style.  His hair has been donated in his memory to Locks of Love.

Condolences and memories may be shared at www.simplecremationevansville.com.  A memorial service will be held at a later date. Donations can be made to the National Pancreas Foundation.