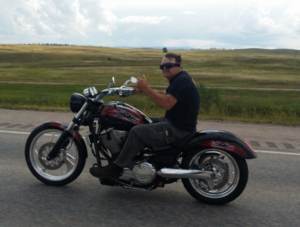 Petersburg, IN –James “Jim” Fulton Donahay, 72 of Peterburg, Indiana, passed away on Sunday, June 27, 2021 at his home. He was born on April 16, 1949 in Sullivan, Indiana to the late Robert Donahay and Norma Vanmeter.

James was a graduate from Princeton Community High School in Princeton, Indiana, class of 1967.

James proudly served his country in the Vietnam War as a Combat Radio Operator from 1969-1971 and became a US Army Combat Vet.

James was a Miner Operator at AMAX Coal (Wabash Mine) in Kingsburg, Illinois where he retired, and a member of the United Mine Workers Union.

After retirement, James attended Vincennes University and obtained a degree in Industrial Maintenance.

James never let the grass grow under his feet, and you could always find him in a garage building something. He had a passion for anything with an engine, and the knowledge and talent to build anything. He built a custom truck for his son, several motorcycles for himself and others, and had built a custom Rat Rod with his son at the time of his passing.

In 2009, James started his own custom bike shop called Steelponies. Members from Motorcycle Clubs from all areas would come to have James work on their bikes.

In 2014 James started working at Vicbaggers in Francisco, Indiana and assembled the engine that went into the Crazy Horse bike that was featured in the May 2015 addition of Road Iron Magazine. James always dreamed of going to Big Sturgis in South Dakota, and that dream was fulfilled in 2015.

James is survived by his wife; Lanette (Abell) Donahay, of Petersburg, IN, his children; David Donahay (Tyesha) of Princeton, IN, and Jamie Donahay-Bailey (Cameron) of Chandler, IN, Stepchildren; David Golden and Jamie Golden, Grandchildren; Chandler Bailey, Chase Bailey, and Alex Donahay, Great Grandchildren; Amelia and Madilynn Bailey, and his siblings; Tom Donahay (Joanne) of Conway, SC, Brenda Paul (Steve) of Falls Of Rough, Ky, and Mike Donahay of Jeffersonville, In, and several nieces and nephews.

Simple Cremation of Evansville is entrusted with care.

A memorial celebration is being planned for friends and family to attend. It will be published at a later date.