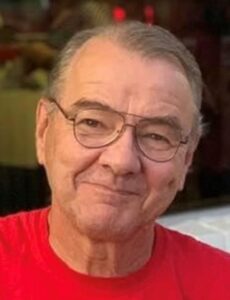 Washington, IN – James (Jim) Bill Green, 71, passed away peacefully on July 5th at his home in Washington, Indiana.  He was born October 19th, 1950 to the late Jim and Nondas Green in Paulding, OH.

Jim grew up in Fort Wayne, Indiana attending Snider High School graduating in 1969.  Shortly after graduation he began his career at GTE (General Telephone) where he ultimately retired in 1998.  Jim had a passion for golf ultimately spending much of his retirement in Hot Springs Village, Arkansas, a gated retirement and golf community.

During one of his work assignments at GTE, Jim found an enormous Santa, Reindeer, and Wreath display that he remembered from his childhood from the Wolf and Dessauer department store.  He immediately thought how nice it would be if the display could be brought back to life for future generations to enjoy.  His supervisor made a deal that if they pulled a light bulb out and it worked, they would find a way to start the restoration.  As luck would have it, the light worked and the display was saved.  Many volunteers, trade unions, and companies eventually got involved and helped to restore the display and bring a new tradition to life.   Over 40 years later the “Night of Lights” is the lighting of these displays in downtown Fort Wayne and is an annual tradition enjoyed by thousands on Thanksgiving Eve.  Jim was absolutely thrilled to be honored on stage and presented a plaque for his involvement in igniting this tradition at the 30th anniversary lighting in 2009.  Jim loved telling this story and loved how much joy this continues to bring so many people.

A private celebration of life will be held by the family at a later date, fond memories and expressions of sympathy for Jim’s family may be shared at www.SimpleCremationEvansville.com

In lieu of flowers please donate to your local animal shelter, hospice, or dementia support organizations.