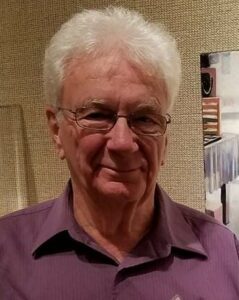 Boonville, IN – H. John Smith, a renowned local artist, 83, of Boonville, Indiana, passed away on Thursday, August 11, 2022 at Deaconess Gateway Hospital in Newburgh, Indiana.  He was born on June 26, 1939 in Cooperstown, New York to the late Harold and Ruth (Foster) Smith.

H. John was a renowned and awarded artist, including awards for best in show. He has had his works displayed in the Evansville Arts Museum, Ellis Park, Solarbron, Riverwind Gallery, Hoosier Salon of Indianapolis, the Audubon State Park Museum and the Ohio Valley Art League just to name a few.  He also has had his work published in the American Society of Marine Artists, which has been on a National Tour.

H. John took pride in his academic background, having earned an Associate’s degree from the School of Visual Arts in New York City, New York, a Bachelor’s degree of Fine Arts at University of Evansville and had also attended Ithaca College. He had worked as the Graphics Director at Evansville Press and for many years worked with Grant Gerling at Gerling Insurance and Gerling Assured Financial Resources.  Other life ventures include acting at the Civic Theater and even being a pilot.  H. John proudly served in the United States Marine Corps.

Preceding him in death are his parents as well as his sisters, Barbara Miller and Becky Fazio.