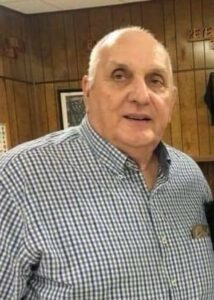 Glenn was preceded in death by his parents and sisters Dodie, Gerri, & Brenda and brother Tom.

Glenn was a devoted family man. He grew up as the second youngest of 8. His father passed when he was 3 years old. Glenn excelled at football and basketball at Boonville High School. He received numerous awards for his athletic ability. After graduation, Glenn attended North Texas State on a basketball scholarship. He left North Texas State to move home & be closer to family. He was drafted into the United States Army and went to Vietnam. He returned to marry Barbara and start a family. Glenn retired from Peabody Coal Company. He was a member and officer in the United Mine Workers of America. He was a lifetime member of the Boonville VFW and also a member of the Boonville American Legion.

He was a loyal and loving friend. He was also a devoted family man & dedicated himself to his brothers & sisters, brother in-laws & sister in-laws, his nieces and nephews, his great nieces and nephews and even great-great nieces and nephews. He and Barbara enjoyed traveling and spending time with friends. Family gatherings on Memorial Day & Thanksgiving were dear to him. He was loved and adored by children & he loved and adored them back, especially his great-granddaughter Daelynn. He enjoyed spending time on his deck visiting with friends and loved ones watching the Chicago Cubs. Glenn was a tissue and organ donor.

Donations in his honor can be made to Main Street United Methodist Church’s Matthew 25 program at 222 East Main Street, Boonville, IN