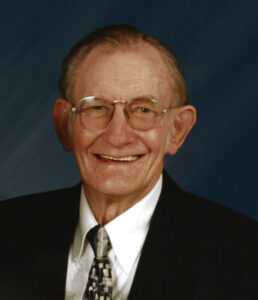 George Daniel King, 87, of Evansville passed away Monday, October 19, 2020. He was born March 5, 1933 in Huntingburg IN, to the late Guy Albertus (Bert) and Myrtle Melvina (Gentry) King.
George was a kindhearted man who would do anything for you and he never knew a stranger. He served his country in the United States Army. He was a servant of the Lord Jesus Christ and enjoyed sharing his faith with others. George was a great salesman and worked in the soft drink industry, where he retired from RC Cola. He loved traveling and after retiring he took a job as a truck driver and he enjoyed seeing the U.S.A. He was a car enthusiast and loved fixing up cars to sell. Most of all he loved spending time with his children, grandchildren, family and friends.
He is survived by his children: Teresa Hawes, Georgetta “Jo” (Jerry II) Gerling, Linda Lurker (Bart) Smith, Rebecca Decker, Daniel Ray King; grandchildren: Rick (Jamie) Fluty Jr., Amanda (Tim) Hawes, Chris (Tiffany) Hadfield, Candice “Nicki” (Stephen) Sauls, Jerry Gerling III, George Gerling, Brandon Decker and Blayne (Alison) Decker; sister, Lois Laverne (Jerry) Mullen, brothers: Guy Gene (Sharon) King and Chester Ray King, brothers-in-law: Willis (Vickie) Schroader, Robert (Lee) Wire, sister-in-law, Jean Mingus and Carol (Ted) Groves, many great grandchildren, nieces and nephews.
George is preceded in death by his wife of 56 years, Zelma Dean (Schroader) King, his parents, brother, Mark Allen King, son-in-law, Charles Goad and sister-in-law, Janice King.
There will be Celebration of Life on Friday, November 6th at 11:00 a.m. at Park Lawn Cemetery’s Patrician Chapel, 1526 S. Green River Rd, Evansville, IN. Gene King to officiate.
Visitation will be at 10:00 a.m. prior to service.