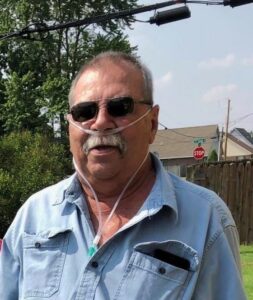 Gary was born June 9, 1950, In Evansville IN, to Morris and Mary Rhodes. He retired from whirlpool in 2004 as a repairman, after 35 years of service. He attended Reitz High, Cedar Hall and Armstrong Schools. The greatest enjoyment of Gary’s life was spending time with his family.

He never missed a ball game, sports activity or school program with any of his grandchildren. He loved taking his fur baby Nina to the Evansville State Hospital Park to feed the squirrels and ducks. He also, enjoyed fishing and anything nature. Gary loved being a husband, father, grandfather, great-grandfather, and brother.

The family would like to give a special thank you to his hospice nurse, Nicole for her compassionate care in the last few months.

At Gary’s special request, no services will be held.