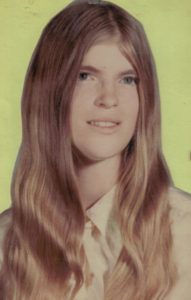 Nellie was born on March 6, 1957 in Lilbourn, MO.  Her parents died when she was just a small child.

She was a genuine hippie and enjoyed her cannabis, riding motorcycles and going fishing.  Nellie also was a collector, especially of animals including birds, dogs, cats and fish.

She will be missed by all who knew her.

She is preceded in death by her parents; and brother, Jackie Eakins.

The family would like to give a special thanks to Lena Lang for always being there for her and taking such good care of her.