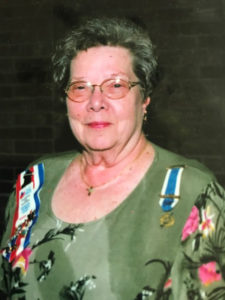 Eleanor “Lee” Mourer of Mt. Vernon, Indiana, formally of Williamsport, Indiana passed away on Saturday, June 15, 2019 at Linda E. White Hospice House surrounded by her family. She was born on July 23, 1931 in White County, Indiana to the late Lester Merle and Myra Louise (Redman) House.

In the spring of 1950 she took a dare and asked Gerald Eugene Mourer to go roller skating with her. They were married on October 14, 1950.  For the past 68 years they enjoyed traveling, joining euchre clubs and attending family gatherings.

Lee is survived by her husband, Gerald; four children, Teresa “Terri” Branson (Mike) of Mt. Vernon, IN, Diana Lynn Mourer of Columbus OH, Karen Sue Cross (Roger) of Albany, GA, and Gary Gene Mourer (Leanna) of Mt. Vernon, IN. She was extremely proud of her eleven grandchildren and 23 great-grandchildren; two sisters, Barbara Taylor (Richard) of Crawfordsville, IN, Janet Fields (Bill) of Waynetown, IN; and many nieces and nephews.

In addition to her parents she was preceded in death by three sisters and two brothers.

Lee was a bookkeeper for Mt. Vernon IGA which she co-owned from 1972 to 1980 and also at Joe Higginbotton Oil & Industries and Coldwater Creek. She was an avid bowler, played euchre and was in several bridge clubs.  She was a member and Past Regent for General Thomas Posey Chapter, Daughters of American Revolution from 2001 to 2008.

Memorial contributions in honor of Lee may be made to Student Education Association Scholarship Fund at the University of Southern Indiana.

The family would like to thank the staff of Deaconess VNA/Hospice nurses, Home Instead -Heather, Kaylee and Robin. Individual caregivers, Michelle, Shirley, Karla, Amy, Toni and the staff at Linda E. White Hospice House.