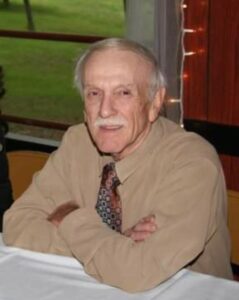 Evansville, IN – Edward Louis Lipking, Jr., 84, of Evansville, Indiana, passed away on Tuesday, March 22, 2022 at his home surrounded by family.  He was born on December 8, 1937 in Evansville to the late Edward, Sr. and Mildred (Dixon) Lipking.

Edward was a 1956 Reitz graduate, where the panther patch he designed for his graduating class is still on display.  He was a gifted artist, to which he credited to being left-handed.

Edward completed his service to our country and was honorably discharged from the United States Air Force in 1960.  He then went on to graduate from U of E with a bachelor’s degree in Business.

He loved traveling the world and working on crossword puzzles, but most of all he loved dogs which he fostered from the Warrick County Humane Society until the time that he was physically unable to at the age of 82.

Edward’s greatest achievement was raising his niece and caregiver, Jodie Holder as his own daughter.  He gave her children, Harrison Edward Holder and Grant Wayne Holder the best grandfather they could ever have.  He will always be their “Uncle Eddie.”

Edward is preceded in death by his parents as well as his sisters, Linda Lipking, Judith Harris, Mary Wirth, Kathy Fussner and Nancy Walts.

He is survived by his sisters, Shirley Duncan, Barbara Niehaus (Donald), Rebecca Sutton; his brother, David Michael Lipking (Judy); his niece, Jodie Holder (Craig); his great nephews, Harrison and Grant Holder as well as many nieces, nephews and cousins.

In lieu of flowers, Edward’s wishes may be honored by sending a donation to an animal shelter of your choosing in his name.

The family would like to give a special thanks to Deaconess Hospice for their comfort and care.