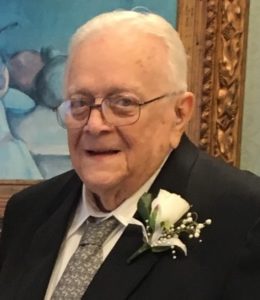 Dr. Thomas C Scholl, of Newburgh, Indiana, age 92, passed away with his son and granddaughter by his side at the Linda E White Hospice House on Thursday, March 5, 2020. He was the son of William Theodore and Gladys (Cauble) Scholl and was preceded in death by his older brother, Bill, and younger brother, Larry. Tommy is survived by his wife of 70 years, Anita; brother, Kenneth (St. Louis, Missouri); daughters Elizabeth (Belleview, Florida) and Debbie and her husband, Doug (Jonesborough, Tennessee); son, Tom and his wife, Cindy (Newburgh); grandchildren Jason, Erik, Ellie, Breanne, Brandon, and Jordon plus 5 great-grandchildren; Niece, Pamela and her husband, Jim and Nephew, Glen.

He was born in the Princeton hospital and spent part of his childhood in Oakland City prior to moving to Evansville. After graduating from Bosse High School, he served in the US Navy, then attended the University of Louisville Dental School graduating with a Doctor of Medical Dentistry. “Doc” is best known for his 56 of dental practice at Haynie’s Corner (Evansville) and Newburgh. It wasn’t uncommon to see him with his little black bag going into nursing homes and doing house-calls for shut-ins.

It was also common to see him in his oversized garden behind the Newburgh dental office in between patients, usually washing his hands. For years, he played french horn in the Hadi Shrine band performing in countless concerts, the Shrine Circus, and the marching band. Here he developed life-long relationships that he cherished.

Tommy’s entrepreneurial mind led him to become an inventor, real estate developer and builder and engage in every multi-level marketing scheme that came by. In early years he loved fishing, boating and traveling.

On his death bed Tommy was overheard thanking the Lord Jesus for his family, friends, and for preparing for him a home in heaven. The family, too, is grateful for his friends and the wonderful care he was given at Deaconess Gateway and the Linda E. White Hospice House to whom the family encourages memorial contributions be be given. (https://www.deaconess.com/For-You/Donors-and-Volunteers/Give-Now).

The family will honor Tommy and Anita’s wishes to have their ashes combined upon her death and placed alongside and overlooking the Ohio River in a private memorial service.