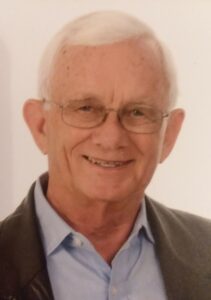 Donald Eugene Hume of Winslow, Indiana passed away on December 31, 2020 after a long, full and happy life of 94 years.  Donald and his wife of 70 years, Shirley Ann Hume (Rogers), have enjoyed family life with their daughters: Denise Elaine Hume Stewart, Roxane Sloan and Darcee Hume-Thoren, son-in-laws: Joe Stewart, Jeff Sloan, and Michael Thoren, grandchildren: Amanda Stewart and her husband Will Smith, Joshua Sloan, Tess (Thoren) Bowyer and her husband Peter Bowyer, as well as two great grandchildren: Kathleen and Helen Smith.  Donald loved being surrounded by family and if musical instruments were involved, it was even better.

Donald is the son of Austin and Myrtle Hume.  His upbringing was in the countryside of Pike County alongside his much loved 6 brothers and 2 sisters.  This upbringing influenced his choices and passions throughout his life.  He enjoyed studying and practicing Science, Philosophy, Public Service (a passion shared with his brother, Lindel) and Old Time Music.  Although he was often seen in a suit or uniform, Donald was most happy outside among the dogwood in his jeans, a flannel shirt and one of his many favorite hats.  He was proud to call himself a Hoosier.

Donald’s life was rich in friendships and service.  He had an uncanny knack for running into good friends wherever he might be travelling.  Donald served in the 1st Cavalry Division in the Pacific Theater and, at (almost) 18 years of age, was among the last soldiers trained on horseback.  He served as a military scout in the liberation of the Philippines (three bronze battle stars) and was present when the U.S. flag was raised over Tokyo.  After returning from war, Donald served his community, state and country as a public school teacher and principal for 36 years, as an officer and instructor at Culver Academies for 51 summers, and as a Colonel in the Indiana Guard Reserve.  Donald was elected and re-elected serving Southern Indiana residents as their State Representative for 22 years.  He was a three time recipient of the Sagamore of the Wabash (awarded by three different Governors).  Donald also received an Honorary Doctorate of Law from Oakland City University.  Many of his endeavors could not have been accomplished without the help and support of his wife, Shirley, whom he loved dearly.

Donald was a sweet man who genuinely cared for people.  He enjoyed teaching students- young and old, always encouraging their greatest potential and imagining their best future.  His family is grateful for his strong example of full-on engagement in life whether it be learning to scuba dive in his 60’s, teaching chess and archery in his 70’s, travelling in his 80’s, or learning about technology in his 90’s.  His example was always to go and do.  His legacy to his family and friends is optimism.

Covid makes it difficult to gather and celebrate his well-lived life, so please honor him by taking kind and careful care of one another during these difficult times.  Wear a mask and social distance.  If you would like to share a happy memory of Donald or of how Donald impacted your life, please send it to:

These remembrances will be shared and treasured by his wife, Shirley, and his family.

Donald is preceded in death by a son, Clinton Dirk Hume.