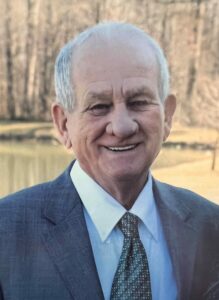 Donald (Don) Frank Gough was born on August 8, 1932 in the Westside of Evansville. Don was 90 years old and he lived life to the fullest for each of those years. On October 8, 2022, he passed away in his home, surrounded by his loving family.

Don attended Reitz High School before be joined the Navy in 1952.  Don was stationed in San Diego, California, where he proudly served on USS Hancock. He and Barb were married on January 20, 1962 and resided in Evansville. Anyone that knew Don, also knew of his deep love for Barb.  She was truly his soul mate and the love of his life.

When he returned from the service, Don worked as a Laborer and then a Cement Finisher. Most of his career was spent finishing cement with Hicks and Sons Construction Company. He was a hard worker and a member of Locals 561 and 566.  Don had belonged to the Eagles, Central Turners, the Moose Lodge and the Owls. He was a lifetime member of the VFW 1114 and a proud member of the Tri-State Clabber League. Don was president of the South Youth Baseball League.

Don stayed active, coaching baseball for Jeff and later supporting Jeff’s basketball and football through High School. He loved attending Vicki and Tara’s dance recitals and Tara’s Basketball games; then later all of the games and activities of the grandchildren.  Don enjoyed playing basketball and golf.  He loved bowling, especially with Jeff. Don loved his Children, Grandkids and Great Grandkids so much. He never met a stranger and loved joking around with other people. After retiring from his trade, Don began a new career at JC Penny. He loved his job there and all of the people he met.  He was frequently seen telling a joke, performing his dance moves or telling stories. Don was strong. Don was kind and compassionate. Don will be deeply missed.

Don made friends wherever he would go. We are appreciative of the help and support from family and friends. We would like to thank the staff of Aseracare for their loving care and support of Don during his last days. A Celebration of Life will take place on November 19, 2022 from 5:30pm – 7:30pm at Lakeside Manor Community Center (3201 North Green River Road, Evansville, IN, 47715). All family and friends are welcome to attend.