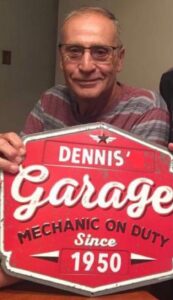 Evansville, IN – Dennis L. Cardarelle, 71, of Evansville, Indiana, passed away peacefully on Friday, July 8, 2022 at Cypress Grove in Newburgh, Indiana.  He was born on August 23, 1950 in West Bend, Wisconsin to the late Louis and Hada Cardarelle (Wren).     Dennis graduated from West Bend High School with the class of 1968. He later married Janette Dornacker of Kewaskum, Wisconsin and  they resided in West Bend until  2008 where they moved to Evansville, IN .  Dennis was employed by Tecumseh Power Products Grafton, WI  as a machine operator for 20 years,  traveled the country delivering  and operating Wood Chippers and later  proud owner and operator of  his own trucking business  DLC Trucking.

Throughout his life he enjoyed collecting cars, riding motorcycles, camping, grilling and  spending time in his garage tinkering with lawnmowers and small engines.  To his grandchildren he was known as ‘Gpa’.   Dennis had a special connection with dogs, especially Gus who was his loyal companion.

Dennis is preceded in death by his parents and his brother, Donald Cardarelle (sister in-law Jeanette ) and brother in-law  Ollie Wiesner.

In lieu of flowers, memorial contributions may be made to the Washington Co. Humane Society in Wisconsin.

The family would like to give a special thanks to the administers and nurses of Cypress Grove and Southern Care Hospice.

Plans to hold a memorial service in Wisconsin will be shared at a later date.