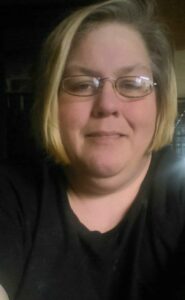 Evansville, IN – Dayna Lynn Hayes, 51, of Evansville, Indiana passed away on Saturday, April 2, 2022 at Majestic Care of Newburgh in Newburgh, Indiana.  She was born on March 28, 1971 in Henderson, Kentucky to Alan and Ruby (Pryor) Staser.

Dayna enjoyed working on puzzles as well as painting and playing games electronically.

She is survived by her husband, Robbie Hayes; her children, Taryn Hayes, Sabra Hayes, Robbie Holloway and Mariah Smith; her grandchildren, Jaden, TJ and Harmony; her father, Alan Staser as well as siblings, Johnna Cruz and Robert Staser.

A memorial celebration will be held at a later date.

In lieu of flowers, memorial contributions may be made to the Vanderburgh County Humane Society in Evansville, Indiana in Dayna’s name.