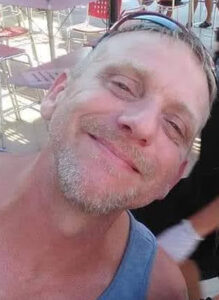 Evansville – David Jason Morrow “George” “Dave”, 48 of Evansville, passed away on Wednesday, March 24, 2021 at St. Vincent Evansville. He was born June 23, 1972 in Evansville to the late Jamie Morrow and Agnes “Aggie” Combs (Schmitt).

David was a caring son to Aggie and he would do anything for his “Momma”. David was a loving father to two biological boys, Kyle (Carlie) and Lucas Morrow. He was like a father to many more, including his “Peepots” Kendrick and Kaden. He had so much love to give and he shared it with so many. He was a “not fiancé” to Toni Smith. They shared many years together and loved each other so much. He was a loyal brother to Shannon “Nana” and so many others who called him brother. He was a caring uncle to Nicholas “Nick” (Chole) and Kaitlyn “KiKi”. He was a cherished papaw to Makaylah, Josh, and Sofia.

When David wasn’t hanging drywall, he loved spending time with his family (including his family of friends). He had a passion for his “toys”, including go carts, four wheelers, motorcycles, motorbikes, and anything that would go fast and make dirt fly as he sped doing donuts. He enjoyed watching dirt racing and would make $1 bets with the grandkids. He enjoyed making jokes and laughing.

He will always be remembered for the love he had for his family. He was the dad that would encourage his boys to show emotion and love hard. He was the papaw that would give the grandkids candy behind mom’s back and tell them not to tell. He also taught his kids and grandkids to fight for what is right, and to not go down easy. Above all, he taught them what was most important, and that is FAMILY. Family and love are the things that kept him going. He would do ANYTHING for his family and the people that he called family.

David was not a traditional kind of guy, so in lieu of the traditional funeral services, we are going to have a Celebration of life on Saturday April 3, 2021 at the East Shelter (outdoor) at Wesselman’s Park (602-560 N Boeke Rd, Evansville, IN 47711). It will start at 1pm. David loved so many people, so let’s show him how truly loved he really is and celebrate his life.