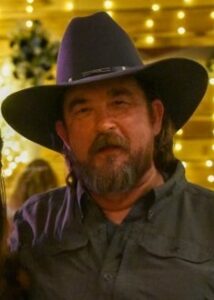 Henderson, KY – Darrell Franklin “Frank” Vaughn, 62, of Henderson, Kentucky, passed away on Thursday, November 25, 2021 at his home.  He was born on June 18, 1959 in Henderson to the late Billy and Elaine (Peckenpaugh) Vaughn.

Frank had previously been the president of the Henderson Area Riding Club.  He enjoyed working with 4H kids in their equine program, camping and cooking.

He is survived by his children, Joe Vaughn and Sandy Nicholson, Josh and Michelle Vaughn, Ely and Jennifer Vaughn all of Milwaukie, OR; Ashley Blair of Harrisburg, IL; Dylan Blair of Lexington, KY and Cody Davis of Minot, ND; his grandchildren, Kayla, Blake, Trenton, Rayli and Elayna; his brother, Billy Vaughn of Springfield, MO and his sister, Cecelia and David Carter.

A memorial celebration will be held at 1:00 P.M. on Sunday, December 12, 2021 at Sandy Watkins Park in Hebbardsville, Kentucky.

In lieu of flowers, memorial contributions may be made to Hoofprints in the Sand and St. Anthony’s Hospice, both of Henderson, Kentucky.

The family would like to give a special thanks to the wonderful staff of Deaconess Gateway Hospital in Newburgh, Indiana and the staff at St. Anthony’s Hospice for their wonderful care.